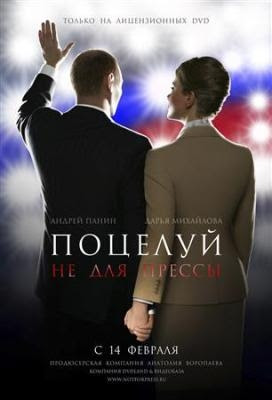 I was given this Link by Matt who owns a blog titled: Working Abroad!

It is about a movie coming out on DVD only and it resembles the life and times of President Vladimir Putin, It states clearly that this is a fictional movie.

Moscow Times says:
“She is a former air hostess; he is a fair-haired St Petersburg-born politician with a secret past and a thorough knowledge of German. Their love affair is depicted in a new film, “Kiss Me Off the Record,” which will be released on DVD on St. Valentine’s Day.

Despite the familiar-sounding characters, the film’s makers claim that its hero is not Russian President Vladimir Putin, but a fictional Russian politician named Alexander Platov.”

We think that this may be a good movie and are looking forward to watching it. I just hope it has English subtitles! 🙂 The statement has been said that it is on DVD only, because they want whole families to be able to watch this film together at home. Most families do not go all together to the movies?

Russians have strong feelings about Putin & most think that he is doing a good job, Russians also feel that he is a good Husband and Father!

So we will see what this film is about & we will get back to everyone with what we see.