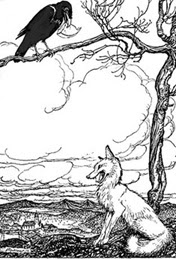 There is a fairy tale from my childhood that evidently Russians know about also!

In a dairy a crow,
Having ventured to go,
Some food for her young ones to seek,
Flew up in the trees,
With a fine piece of cheese,
Which she joyfully held in her beak.

A fox, who lived by,
To the tree saw her fly,
And to share in the prize made a vow;
For having just dined,
He for cheese felt inclined,
So he went and sat under the bough.

She was cunning, he knew,
But so was he too,
And with flattery adapted his plan;
For he knew if she’d speak,
It must fall from her beak,
So, bowing politely, began.

“‘T is a very fine day”
(Not a word did she say):
“The wind, I believe, ma’am, is south;
A fine harvest for peas:”
He then looked at the cheese,
But the crow did not open her mouth.

Sly Reyard, not tired,
Her plumage admired,
“How charming! how brilliant its hue!
The voice must be fine,
Of a bird so divine,
Ah, let me just hear it, pray do.

“Believe me, I long
To hear a sweet song!”
The silly crow foolishly tries:
She scarce gave one squall,
When the cheese she let fall,
And the fox ran away with the prize.

Moral
Ye innocent fair,
Of coxcombs beware,
To flattery never give ear;
Try well each pretense,
And keep to plain sense,
And then you have little to fear.

Moral: DO NOT TRUST FLATTERERS

Vladimir Filonov / MT
The piece of cheese back in the arms of the fox and crow on Wednesday.

A 200-kilogram bronze block of cheese is back in its rightful place less than a week after vandals removed it from a statue in the north of Moscow.

The item, in the shape of the famous processed cheese Druzhba, or friendship, complete with bar code, was stolen from the arms of a giant statue of a Fox and a Crow on Jan. 30, local media reported.

The statue, located on Ulitsa Rustaveli, opposite the Karat factory that makes Druzhba cheese, represents an ancient Greek fable about a fox who cons a crow into dropping her cheese by flattering her. Instead of arguing, however, the two figures in the statue are portrayed in an embrace.

The statue was commissioned at a cost of $500,000 by the factory in 2005, Vechernaya Moskva reported.

Moral: DO NOT TRY TO CARRY HEAVY CHEESE

By the way 200 kg is about 441 pounds,
This is why I like Russia, You never know what someone is going to do!