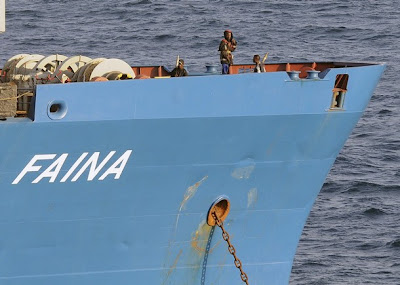 A few months ago I wrote several articles about the Ukraine cargo ship Faina, that pirates had captured near Somalia! The ship was loaded with military hardware including 33 Tanks! It seems that Ukraine has been shipping for some time a lot of military weapons to multiples of destinations. The issue is not whether they should ship arms legally all over the world but whether the military could afford to sell it, did they sell illegally and that the money went to line the President of Ukraine’s pocket.

“Ukraine’s government has been accused of illegally trading in arms by its own parliamentary commission. An inquiry was launched to investigate whether laws were broken in the selling of weapons to Georgia. The head of the commission says President Viktor Yushchenko forced officials into damaging Ukraine’s own interests.” (Link)

It seems that President Viktor Yushchenko has been a bad President like so many around the world are this day and age. I mean: what good is it to become President if you can not become a billionaire? (Right?)

The Ukraine parliament has instigated a investigation into the allegations and it seems that the results are not looking very good. The Ukraine military is in shambles and has almost ceased to function, yet they sold 2.5 billion dollars worth of military hardware and only 200 million dollars got to the military. (Oops!)

Also from this investigation has surfaced the fact that Ukraine operated some of the rocket systems that were used to shell South Ossetia. This has become more fact than fiction now.

The fact is: Russian Rosoboronexport Company was offering to modernize Ukraine military production lines. It would have created better weaponry and also stimulated more jobs at our weapon factories. But when Russia learned that Kiev secretly sold arms to Georgia and fired the rockets that killed thousands, it reversed its once in a life time offer!

Meanwhile, the cargo ship Faina with Ukrainian weapons on-board is still being held by Somali pirates. Some sources claim part of the shipment wasn’t headed to Kenya, but to Southern Sudan, which is subject to an arms embargo. If this is proven correct, Kiev should face a serious international scandal.

Looks like it is time for a new President in Ukraine….. (Link)