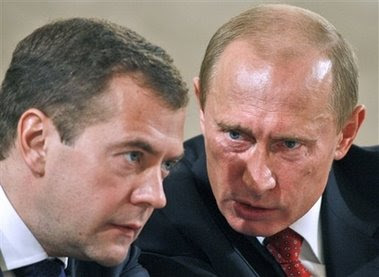 the future of certain issues on this side of the world. Usually it is something that is quoted from Medvedev or Putin. Then quoted vice a verse

Today we have Putin saying: “It’s still our common problem, because ensuring a normal supply of gas for Ukrainian domestic consumers is an important condition for ensuring gas supply to European consumers,” he pointed out, recalling the experience of the gas row in January 2009.

Putin’s words mirror a similar statement of President Medvedev, who told European leaders on Friday at the Russia-EU summit in Khabarovsk, that he, “Doubted Ukraine’s ability to pay its gas debt.”

Medvedev also said: “Partners in such situations help their partners, and we are prepared to help Ukraine, but we would like to see the European Union, the countries interested in the stability and security of energy cooperation, to take part in the effort too.”

The one thing that Russia has is unity among her two leaders and no matter what the world tries to say otherwise – Russia has the best tag team leaders going on earth right now!

So Medvedev and Putin have tag teamed on Ukraine and her very unstable government. This is no small issue and what with Russia having paid all transport gas ahead of time for the whole year and a possible 5 years ahead on transport gas payment in the works. Russia is trying to help Ukraine but keep Russian head above water also.

Right now Ukraine is lacking 4 billion dollars worth of gas in her underground storage tanks, some 19.5 billion cubic meters worth. This is the transit gas to ensure uninterrupted supplies to Europe. That is adding up fast and winter is around the corner again.

Looks like this year – Russia is waving her arms early and loudly. Don’t blame us, Russia says: We have the gas but Ukraine is always in the middle, and with Ukraine being one of the most unstable governments on this side of the world the odds of a gas issue this Winter are looming larger and larger everyday. Do not say we have not warned you! Lets work together to solve the problem now not when the rivers freeze over with a meter of ice…