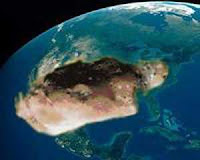 How about an end of the world video – that is the end of the world around 2036! (OK – not the end but a huge hole punched in the world) Russia has been squawking on the Ole television about what needs to be done for the safety of our future. What better time to spread the word of world destruction news, but at New Years…

A celestial body named Aphophis – asteroid 2004 MN4 – is considered the greatest space danger for Earth. In 2029 it will pass within 30 thousand kilometers of Earth, closer than some orbital satellites. The greater danger, though, is to be expected in 2036 when the next encounter with Earth by the asteroid is planned – the trajectory of the celestial body is expected to change so that the collision is quite likely, the head of Federal Space Agency, Anatoly Perminov, said in an interview with the Voice of Russia radio. He mentioned the data comes from research by an unnamed scientist claiming the accident is almost inevitable. (Link)

Now I have been reading that NASA rolled their eyes at the news when Russia pronounced it the other day. But in 2004 NASA had a different view and admitted that there could be serious issues. (I remember)

Russia says that they are working on a solution but that the cure will rely upon all the world to help keep the world from an impact that would destroy an area the size of France if it hit the ground. If it hit the ocean, the tsunami would be beyond imagination!
According to Russia the best thing to do is to try to just alter the course of this asteroid and keep the world safe not sorry.
Cool…
Windows to Russia!
comments always welcome.
PS: Coming within 30,000 km of earth will alter the asteroids course just by gravitational pull of the earth. NASA is not exactly correct in their calculations but deny other calculations…