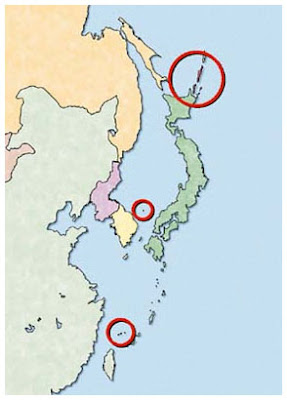 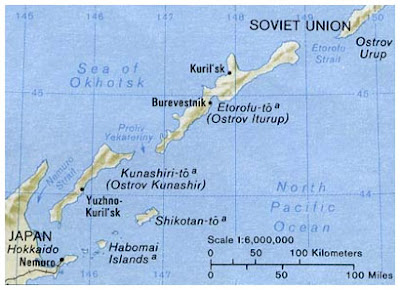 I was drinking my morning cup of coffee and thinking about Putin offering talks over the disputed Islands at the North End of Japan.

Japan has territorial issues with three of its neighbors. Each and every instance seems impossible, and each is a major issue in Japan’s relations with those neighbors. North of Hokkaido, Japan claims the four islands that it calls the ‘Northern Territories’. To Japan’s northwest is Takeshima, claimed by the South Koreans. West of Japan is the Senkakus, which China claims.

How did these islands become Russia’s? (Glad you asked!)

The dispute is a direct result of the Second World War. When Japan surrendered, Soviet troops had island-hopped their way down the Kurils, preparing to invade Hokkaido. Stalin announced that the Kurils and the southern half of Sakhalin Island would be in Soviet hands.

Then at the Treaty of San Francisco of 1951, the document that attempted to tie up the loose ends of Japan’s Greater East Asia War, the islands were incorporated into the USSR. The treaty included: “Japan renounces all right, title and claim to the Kurile Islands, and to that portion of Sakhalin and the islands adjacent to it over which Japan acquired sovereignty as a consequence of the Treaty of Portsmouth of 5 September 1905.”

However, the Soviet Union attended but did not sign the treaty, so their incorporation was subject to dispute. Furthermore, the USSR (or later, Russia) did not sign any formal settlement treaty with Japan so the issue persists.

Now Putin has inquired about meeting to discuss getting this issue solved. Both sides have claims to the Islands:

What are the Claims? (Glad you asked!)

For Russia, the matter is fairly straightforward: Territory. The international system does not take to territorial disputes very well as the status quo is nearly always favored. With the territory, Russia has secured military outposts and fishing villages, as well as a further projection into the Pacific. Alongside this is the issue of pride and prestige, both of which will be hit by a relinquishing of the islands.

For Japan, the stakes are more cultural. They were settled by Japanese families and according to Buddhist tradition, their graves remain there, difficult to reach during times of remembrance, such as O-bon. They offer fishing stocks for the fisherman of Hokkaido and would offer more open passage to the Pacific from the opposite side of Hokkaido. The historical claims blend into the political one, and the continuing occupation of the islands by the Russians is an open wound in Japan’s pride and between their relations. Japan wants its borders to reach Urup, as they used to be.

Seems to what I have read: The islands were Japan’s since the Meiji Restoration and remained so until the Soviets took them by force….

The time has come for the countries to make headway on their peace agreement, and that cannot be done until the dispute is settled!

Fukuda said he had received a letter in which Putin had expressed his willingness to end the territorial dispute, which has prevented the two countries signing a peace deal in the six decades since the war ended.

Scores of riot police used buses and gates to block off the Russian embassy in Tokyo on Thursday as dozens of right-wing campaigners cruised the streets in loudspeaker vans blaring nationalist music and chanting slogans calling for the return of the islands.

Despite the long-standing row, the two countries have been trying to expand ties. Russia is keen for funds to develop its far eastern regions, while Japan is eager to tap Russia’s booming oil industry to reduce its reliance on Middle Eastern energy.

The sparsely populated islands in dispute are in the Kuril chain between Japan’s northern island of Hokkaido and Russia’s far eastern Kamchatka Peninsula, with the closest just 15 km (9 miles) from Hokkaido.

They were seized by the Soviet Union after it declared war on Japan on August 8, 1945, just a week before Japan surrendered, sending about 17,000 Japanese fleeing.

Fukuda, who took office in September, is considering visiting Moscow in late April or early May for talks with Putin, Japanese Foreign Ministry sources said.

“I now realize well that the president wants to resolve the territorial issue,” Fukuda told reporters late on Wednesday. “I would like to proactively work on that.”

Moscow had unofficially told Tokyo that Putin wanted to meet Fukuda before leaving office in early May, the sources said.

Putin will step down as president in May, after hitting a constitutional limit of two terms in office, but has made clear he intends to keep political influence by becoming prime minister after he leaves the Kremlin.

“Perhaps, one of the main reasons why Putin wants to hold talks with Prime Minister Fukuda is that he wants to demonstrate he will remain a powerful figure,” one source told Reuters.