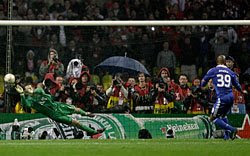 In the stands, the United fans went wild, their 2,000-kilometer trip across Europe to Moscow having been rewarded with a victory in the Champions League final.
——————————————–
Seems that all went well & everyone had a good time!