Russia: What Is President Medvedev Doing? 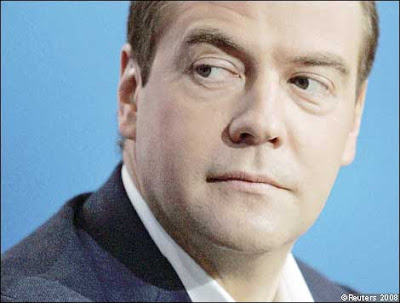 Yesterday I wondered what Prime Minister Putin was up to. So today while I was drinking my coffee I thought that I would see what the President of Russia Medvedev is doing!

1. Russian President Dmitry Medvedev is expected to discuss space exploration and military cooperation with his Kazakh counterpart, Nursultan Nazarbayev, during his first trip abroad as president on May 22-23. Medvedev’s visit to Kazakhstan will be followed by a two-day trip to China, during which the countries will sign a number of documents, including a joint declaration on key international issues.

2. Russian President Dmitry Medvedev said he will hold one-on-one talks with his French counterpart Nicolas Sarkozy during the G8 summit in Japan in July.

4. Russia’s President Dmitry Medvedev signed an order on May 14 allowing Manchester United and Chelsea fans holding tickets for the final at Luzhniki Stadium to enter the country without visas.

6. Russian President Dmitry Medvedev’s successful start suggests that we should expect many and substantial reforms soon, and they are badly needed. Corruption cannot continue like this if the Russian state is to stay manageable. Long-prepared reforms for education, health care and pensions are urgent. The country’s infrastructure must be extended and renewed. The government can no longer afford not to reform as it did for the past five years. There is new hope for Russia.

Looks like Medvedev is being the President of Russia……