This Is Something That Two Super Powers Can Be Proud Of! 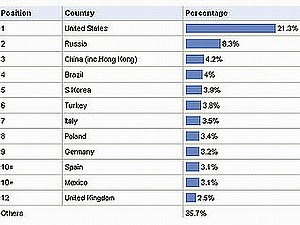 I found this interesting & thought I would pass it on.
=================================
Russia emerged as the second spam superpower in the last quarter of 2007, yielding only to the United States in this traffic, said the report released at the web of Sophos, the IT and security control firm.
Under the Sophos latest report on the top spam-relaying countries, the United States is still the global leader in this indicator, accounting for 21.3 percent of spam traffic. Russia is the second with its 8.3 percent. It finally outpaced China, which managed to reduce spam messages to 4.2 percent and sink to the third position.

America better be careful or Russia will catch them and be the Spam Kings also! 🙂