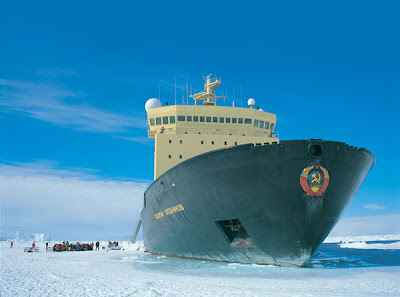 If you follow “Windows to Russia” you know then that I like to follow vessels that sail the oceans of the world and especially ones that have a Russian background. These vessel’s that we will talk about today are as Russian as it gets: Video – “The retired Russian ice-breaker Sampo based in Finland is the only vessel of its kind in the world to offer tourist trips. The ship’s captain says it takes about 10,000 tourists each season around the Bay of Bothnia who like to see it smash its way through ice up to a meter thick at this time of year.“

So when I found this great video I had to post it. 🙂 But then I started to check on that statement about being the only vessel of its kind…

Not so, it is not the only tourist ice breaker –

MOSCOW, November 17 (RIA Novosti) – A group of mostly British tourists on board a Russian icebreaker in the Antarctic are getting more of a trip than they bargained for as the ship has become stuck in the ice.

The Kapitan Khlebnikov is inching its way towards open water – about 5 nautical miles (9 kilometers) away – covering approximately 1.5 nautical miles in the past 24 hours.

The ship is waiting for a favorable wind to help loosen the ice, but the 105 passengers, including tourists, scientists and a BBC television crew, will end their tour a day or two later than planned.

So it looks as though there is more than one old ice breaker from Russia that is cruising the icy waters of the North. The Kapitan Khlebnikov has after a three day extra wait finally got the winds it needed to break free and has now returned to cruising.

VLADIVOSTOK, November 20 (RIA Novosti) – A Russian icebreaker that had become stuck in the Antarctic ice has finally managed to leave the heavy ice zone, a spokesman for Russia’s Far Eastern shipping company said on Friday.

The Kapitan Khlebnikov, with over 100 tourists, scientists and a BBC television crew on board, has been inching its way towards open water – about 5 nautical miles (9 kilometers) away – covering approximately 1.5 nautical miles since Sunday.

All is well that ends well!