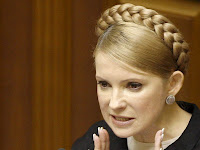 On Monday, February 15 2010, Yulia Timoshenko,Prime Minister of Ukraine, announced she would challenge the results of the Ukraine Presidential election in court on Tuesday, February 16 2010.

She has until February 19 2010 in which to file a challenge to the election that was just held in Ukraine. I wrote an article about how this election is not over until Yulia says it is…

Looks like it ain’t over tell Yulia says it is…

This time Russia has been very careful not to say the victory word in conjunction with Viktor Yanukovich. Because Russia knows Yulia and Yulia is going to go down fighting…

Lets hope that someone talks some sense into her and gets her to let Ukraine settle down!

Not very many someone’s, big enough to do that with Yulia – maybe Putin?