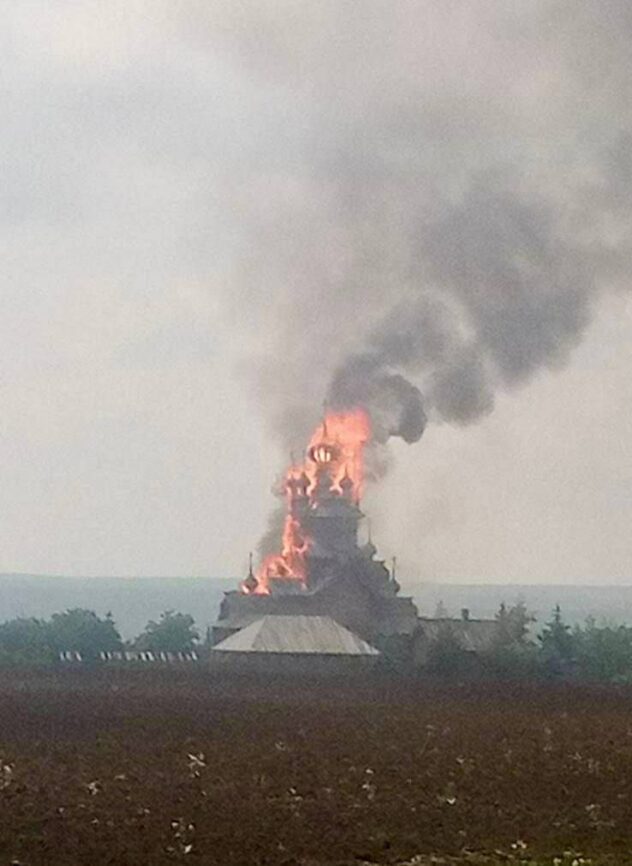 🇺🇦 🇷🇺 The largest Orthodox wooden church in Ukraine is burning – the Wooden All Saints Skete of the Svyatogorsk Lavra of the Moscow Patriarchate, opened in the 16th century was attacked by Ukrainian militants…

Why? Because it is a Moscow, Russia Orthodox Church…

Ukraine shelled it. Why? Because they are Nazi…

This is why Ukraine will never get the lands back. Ever never and they keep this stuff up. They will loose the whole country…

Update: by MoD of Russia

The department noted that the wooden walls of the domed space were shot with incendiary cartridges from a machine gun mounted on a Ukrainian Kozak armored car. After that, the servicemen of the 79th Airborne Assault Brigade of the Armed Forces of Ukraine quickly left in a southerly direction to the side controlled by Ukrainian troops, local residents reported.

“The units of the Russian Armed Forces located north of Svyatogorsk are not conducting combat operations in this area and are not shelling the territory of the Svyatogorsk Historical and Architectural Reserve,” the ministry said.

⚡️On June 4, during the withdrawal of the units of 79th Air Assault Brigade of the Ukrainian Armed Forces from Svyatogorsk, Donetsk People’s Republic, the Ukrainian nationalists set fire to All Saints’ of the Russian Land wooden skete the Svyatogorsk Lavra.

▫️According to the local residents, the wooden walls under the dome were shelled by incendiary munitions from a high-caliber machine gun mounted on a Kozak Ukrainian armoured vehicle.

▫️After commiting the arson, the Ukrainian nationalists headed southbound at a high speed, towards a Ukrainian troops-contolled locality of Sviridovo.

❗️Units of the Russian Armed Forces that were to the north of Svyatogorsk do not carry out any combat operations in this area and do not shell the territory of the historical and architecture reserve of Svyatogorsk.

ℹ️ The All Saints’ of the Russian Land wooden skete in Svyatogorsk was built in 2009 instead of the exploded one in 1947.