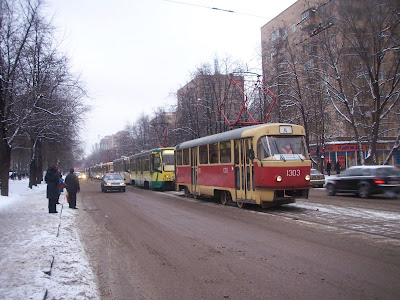 Recently I walked to work again:

Kyle has already published a very good article about my walk to work.

But this particular morning, that I am telling you about; I was in just a little bit of a hurry and a little bit lazy. So I decided to take a Tram.

The Tram just pulled up to the metro station and I got in. There was just three stops to ride…; Unfortunately I rode just half of a stop and disaster struck….. (Click: read more for Tram Disaster!)

The Tram stopped & opened the doors and they told everybody to get out! This is what I saw when I left the Tram and had to WALK to work anyway. 🙂 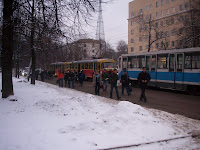 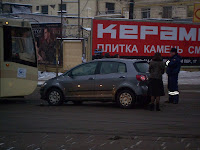 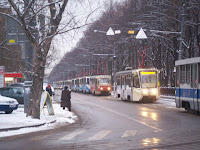 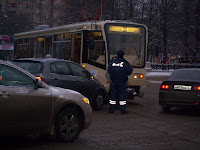 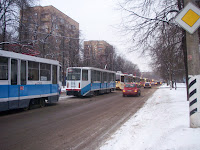 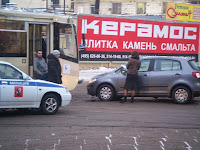 So now as you can see, it was just a little road accident – nothing terrible, no serious victims! Thank God! But nobody could leave the place of the accident, so they were just waiting for road police.

That’s really rather common situation with trams in Moscow. That’s sad! It’s especially sad when you think about all these people who were waiting for a tram! When I think about this, I always remember a mathematical task what we were solving in special mathematical school. That was a task about a bus what is going by schedule every 10 minutes and about poor guy who stands at bus stop already one hour. And the question was what possibility for him to see the bus during next ten minutes. The truth is (I always considered that this is like paradox) that the longer he is waiting the bus the less possibility for him is to see the bus during next 10 minutes. And I remember my Mom tried to explain me how the situation could happened: The more you wait the bus the more likely the bus is broken or something happened.

You’ve seen my pictures. So remember if you are waiting tram or trolleybus too long it might be something happened – think how to get to your place another way.

Never get despair in life, there is always another way!
Best wishes!